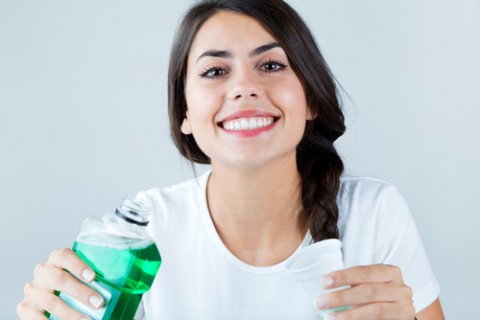 For the 23.1 million Americans with known cases of Type 2 diabetes, living with this often-debilitating blood glucose disease can be detrimental to overall health and well-being. Not only does Type 2 diabetes affect blood sugar and insulin production, but it can also cause damage to the heart, eyes, kidneys, feet and gums. But now, a startling report out of Harvard University has revealed that one common activity many people do to protect their gums could be increasing their risk of developing Type 2 diabetes.

The study followed 1,206 people and found that those who used mouthwash at least twice a day had a 55 percent greater chance of developing Type 2 diabetes than those who use the product less frequently.

Dr. Gary Lederman is a dentist in Bellmore, New York. He says the study findings are troubling for multiple reasons.

"Whenever we hear a headline that something could cause something else, or isn’t effective, we get a wave of panic," Lederman says.  "Remember when the headlines made it seem like flossing wasn’t effective? Well, it always was, but there hadn’t been a recent study proving its efficacy, and that’s where the headline came from. My fear is that people are just going to pour out their mouthwash in protest and stop using it altogether."

According to Lederman, that would be a bad idea.

"The mouthwash itself isn’t the problem, it’s the frequency with which it's being used," he says. "The study believes that what’s happening is the mouthwash is killing bad bacteria, but it's taking the good bacteria called nitric oxide with it. When that happens, the nitric acid can’t do its job regulating blood sugar and metabolism. The key is to find balance."

Mouthwash is still good, but like everything else we do, moderation is key.

"You can have too much of a good thing - even water," he says. "Stick to mouthwash once a day, and give your body a chance to replenish the good bacteria. You shouldn’t need to use mouthwash more than once a day if you are brushing twice a day and flossing once a day. If you’re doing all of that and your breath is still not fresh enough, speak to your dentist to rule out another problem that could be causing it."

How Oral Health Can Affect Lungs

General and Family Dentistry
Email Us