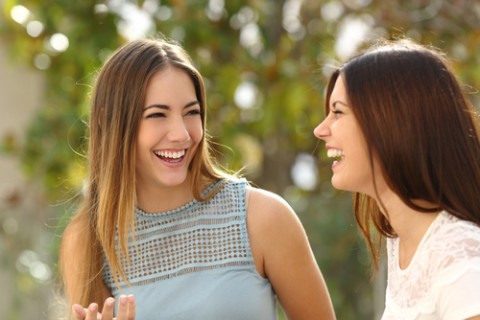 Idioms. They’re one of those elements of everyday language that we often use without thinking about or really understanding what they mean. Curious about where some of the most common tooth-related idioms come from? Keep reading, and we’ll "spill the beans!"

Long in the Tooth: You may have heard someone describe another person as being "long in the tooth." The expression means the subject is getting older. Supposedly its origins relate to horses, who have long teeth that appear longer as they ages. This can even be true for some humans, as gums recede as we age!

Sweet Tooth: This one is a little more straightforward - if someone says you have a "sweet tooth," it means you enjoy sweet foods.

By the Skin of Your Teeth: This is another weird-sounding idiom that isn’t as common nowadays, but when a friend says he "made it by the skin of his teeth," he means he just barely made it. This particular phrase goes back to biblical times and comes from Job 19:20, "My bone cleaveth to my skin and to my flesh, and I am escaped with the skin of my teeth" (King James version), in which Job is describing the effects of an illness.

With a Fine-Toothed Comb: When someone says they went through something with a fine-toothed comb, they are saying they completed a very detailed search. This idiom got its origins from investigators using fine-toothed combs designed to remove head lice to probe crime scenes in the earl 1800s.

Fighting Tooth and Nail: This is another straightforward idiom. It is usually not meant to be taken literally, but instead meant to indicate a valiant effort or struggle, as in, "I’m fighting tooth and nail to get the airline to refund my ticket." It can also be used to describe an actual physical fight, such as, "My kids are fighting tooth and nail over the TV remote."

Rarer Than a Hen’s Teeth: This is used to refer to something very rare, probably because hens don’t really have teeth (they have beaks!). So something would have to be very rare to be rarer than a hen’s teeth!

Armed to the Teeth:  If someone is armed to the teeth, it means they are well prepared. The origins of this date back to the 14th century, when knights wore armor that literally armed them from head to toe.

Bigmouth: When you call someone a bigmouth, chances are you aren’t referring to the size of their actual mouth, but how much they brag, talk or gossip. Believe it or not, this idiom has been used since the 1800s, but you didn’t hear it from me!

Cutting your Eyeteeth: This expression is used to describe someone learning or gaining experience, such as, "I cut my eyeteeth on my Easy Bake Oven, and now I own my own bakery." In this expression, the "eyeteeth" mean your canine teeth, which are spaced to roughly align below your eyes. Evoking the cutting of teeth makes one think of babies and young children who grow in teeth at very young ages. So, saying you "cut your teeth" on something implies you learned the skill at a young age.

A Sharp Tongue: A sharp tongue doesn’t mean your tongue is sharp or barbed; it means the things you say aren’t very nice. For example, "She has a sharp tongue when it comes to her in-laws," means that the subject of the sentence has some critical or not-so-nice but possibly witty or clever things to say about her husband’s family.

We know we said a mouthful with these idioms, but we hope you take these straight from the horse’s mouth and share them with your friends! And remember, if you have any questions or concerns about your own mouth, or need to set up an appointment, give Dr. Lederman’s office a call at 516-882-1764.

Sweets Surrender: How to Finally Stamp Out Sugar