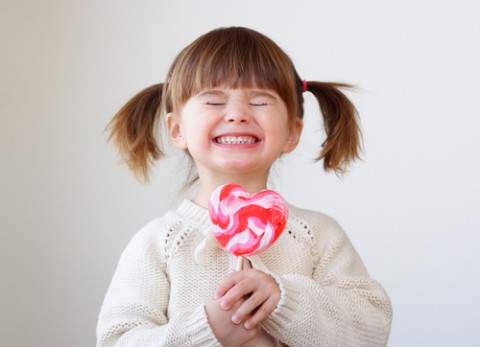 You’d be hard pressed to find a kid who doesn't love candy. But for many parents, it’s a love they’re hesitant to indulge. That’s because with so much sugar already in our diets, the last thing most kids need is more of it. Sugar in moderation is OK, but when sugar is overdone, it can cause a whole list of chronic problems including obesity, diabetes and cavities. Some studies have even linked it to hormone imbalances, premature aging and cancer.

But a new product designed for kids - and by a kid! - could soon make the "I want candy" battle a little easier for everyone to swallow. They’re called "Zollipops" and they were invented by 12-year-old Alina Morse of Bentonville, Arkansas. Zollipops aren’t your average lollipops. They’re made with a sugar substitute called xylitol, which in addition to tasting great, also has many dental benefits.

"Xylitol is a naturally derived sweetener made of plant fibers. It tastes like sugar, but it has the ability to prevent cavity-causing bacteria from sticking to the teeth, so it actually helps fight cavities, too," says Bellmore, New York, dentist Dr. Gary Lederman.

But that’s not all xylitol can do – it can also help increase saliva production, something that keeps the mouth moisturized and also helps to keep bacteria at bay. It has even been found to help repair tooth enamel, because it raises the pH of the saliva to over 7, which allows calcium and phosphate salts in the saliva to fill in holes in the enamel.

Morse was inspired to create Zollipops (as well as Zaffi Taffy and Zollidrops) when she received a lollipop from her father’s bank. She wished the treats weren’t so bad for her teeth so she could have them more often - and an invention was born. The Zolli line was so well received that it won a coveted spot in Walmart’s annual Open Call for U.S. Inventors.

Zollipops will debut at 10,000 Walmart locations around the United States, as well as other retailers like Whole Foods, Dylan’s Candy Bar, Toys ’R’ Us, Amazon.com and Ross. Ten percent of the proceeds from the Zolli line will fund oral health education in American schools, and Morse has pledged to donate 250,000 Zolli products to dentists and educators around the country.

Save That Smile with These Stress Beaters